Swami Advayananda is the President of Chinmaya International Foundation (CIF), the Centre for Sanskrit Research and Indic Studies, and a Trustee of Chinmaya Vishwavidyapeeth (CVV), Deemed-to-be-University. Inspired by the teachings of the visionary and saint Pujya Gurudev Swami Chinmayananda, he joined Sandeepany Sadhanalaya, Mumbai, at the young age of 18 and on completing his Vedantic studies in 1992 was ordained into the dedicated spiritual life by Pujya Gurudev. Later in 2003, he was initiated into the sacred order of sannyasa by Pujya Guruji Swami Tejomayananda.

After initially serving the Chinmaya Mission Centres at Kodaikanal and Trichy in Tamilnadu, he guided the Spiritual and Cultural Education at the Chinmaya International Residential School (CIRS), Coimbatore, from 1996-2000. Thereafter in the year 2000, he became Acharya of the Sandeepany Vidyamandir, at Coimbatore, and conducted the Vedanta Course in Tamil-English. Since 2003, he has been serving as In-charge of CIF. From 2011 to 2013, he was Acharya for the 15th Vedanta Course at Sandeepany Sadhanalaya, Mumbai. Swamiji is also the Acharya of the one-year residential Vedanta Sadhaka Course, conducted at Adi Sankara Nilayam.

An accomplished teacher of Vedanta, with many Gita and Upanishad discourse series to his credit, Swami Advayananda has also authored several books such as the Holy Gita Ready Reference, Advanced Vedanta Course, a series of research articles titled ‘Vedanta Unveiled’, to name a few. He has also edited several Vedantic works in English and Sanskrit such as the Foundation Vedanta Course, Bhagavad-gita Course, Ishvara-darshanam and Suktisudha. He has overseen and co-redacted the scholarly publication of the 2-volume work on the Brahmasutra-catussutri. He has also contributed to the research and coordination of the Upanishad Ganga, a television series depicting the wisdom of the Upanishads, which was first telecast on the Doordarshan Channel.

As the President of CIF, and a Trustee of CVV from 2015, he continues to serve the vision of CIF and CVV of furthering the study, research and dissemination of Indian Knowledge Systems and its application in contemporary knowledge fields. 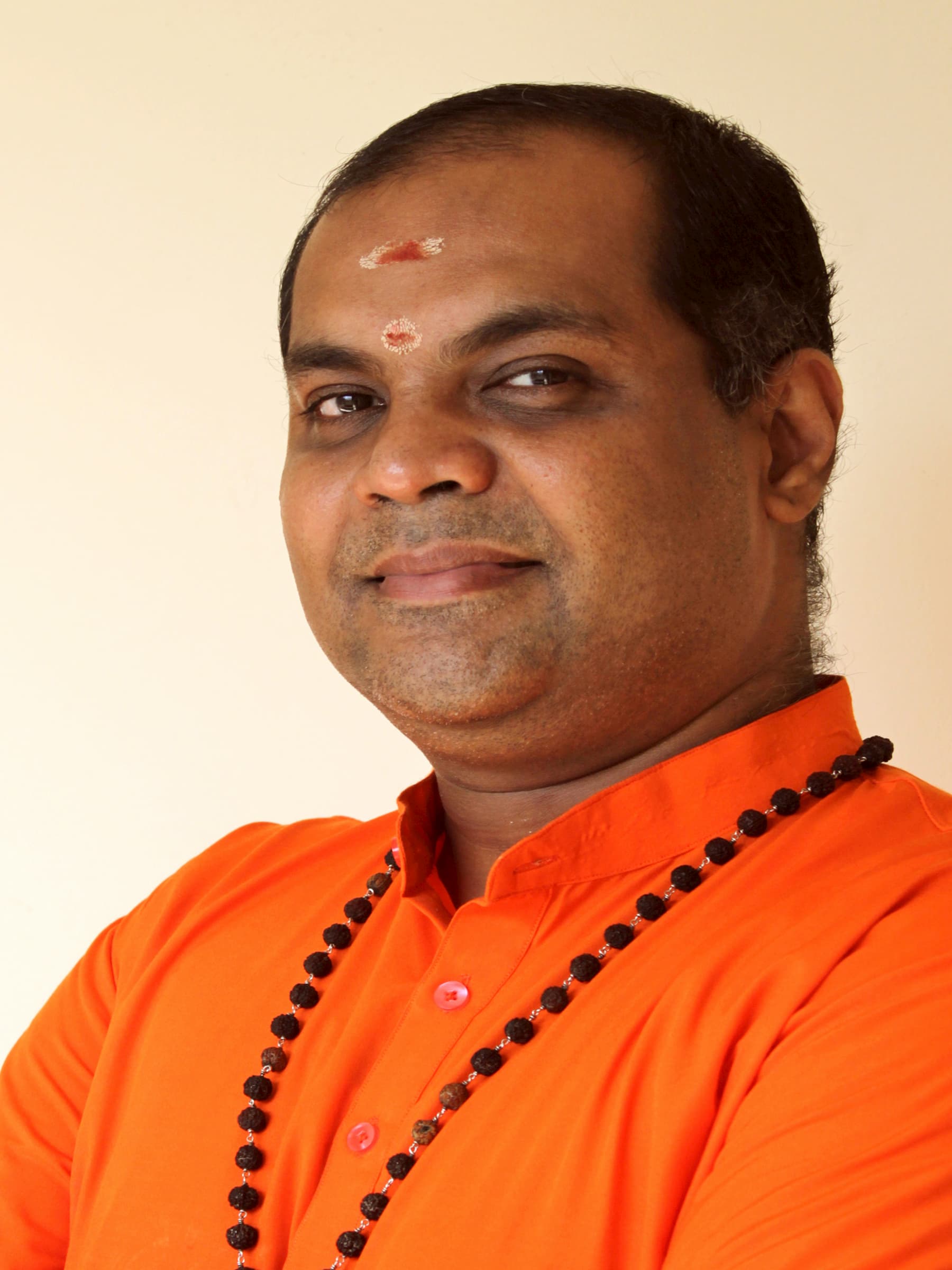 Swami Sharadananda Sarasvati joined the 12th batch of the Vedanta Course under Swami Iswarananda at Sandeepany Sadhanalaya, Mumbai in 2002. Prior to joining the Chinmaya Mission, he studied various Indian spiritual disciplines including Vedanta and Yoga from different ashrams and institutions like Ramakrishna Mission, Divine Life Society (Rishikesh), Bihar School of Yoga (Munger), and others. A post-graduate in Advaita Vedanta, he ranked first at the All India level and was awarded a gold medal from the prestigious Sanskrit University, Rashtriya Sanskrit Sansthan, New Delhi.

He assisted Pujya Guruji Swami Tejomayananda as the Sanskrit Acharya in the 13th Batch of the Vedanta Course at Sandeepany Sadhanalaya, Mumbai. A year after this batch, he became the Acharya for the Purohit Course (Batch of 2010) at Chinmaya Gardens, Coimbatore. Being eloquent, erudite and versatile, he was again appointed as Upa-acharya for the 15th Sandeepany Vedanta Course in Mumbai, where he mesmerized students with his evening classes on the Srimad Bhagavatam and also gave them excellent grounding in Sanskrit and Vedic Chanting. Formerly known as Br. Samvid Chaitanya, he received Sannyasa-diksha from Pujya Guruji on Shivaratri, 2014 and joined Chinmaya International Foundation in March 2014.

He is the Academic Council Member of Chinmaya Vishwavidyapeeth. Swamiji is also the Acharya of the one-year residential Vedanta Sadhaka Course, conducted at Adi Sankara Nilayam. He facilitates many camps at CIF based on Sanatana Dharma, Vedanta, Bhakti, and so on. He was also the Acharya of the two-year residential Vedanta Course (2018-2020) in Malayalam at Kerala Sandeepany, Adi Sankara Nilayam.

Br. Sagar Chaitanya was deeply interested in spirituality right from his childhood. He joined the Sandeepany Sadhanalaya, Powai, Mumbai where he completed his Vedanta Course in 1998. Having bestowed with the Brahmacharya Deeksha by Pujya Guruji Swami Tejomayananda in 1998, he served at the Noida and Sidhabari centres till 1999.

In 2000, he took over as the in-charge of the Vedanta Home Study Course at the Central Chinmaya Mission Trust, Mumbai. Today, Br. Sagar Chaitanya serves at the Chinmaya International Foundation adding a new fillip and inspiration to the Postal and E-Vedanta Courses.

Br. Sundar Chaitanya completed the two-year residential Vedanta Course (13th batch, 2005-2007) under the guidance of Pujya Guruji Swami Tejomayananda at Sandeepany Sadhanalaya, Powai, Mumbai. From 2007 onwards, he has been serving Chinmaya Mission activities and programs such as Vedanta classes for adults and senior citizens, Yuva Kendra classes for CHYKs, Balavihars for children, Jnana-yajnas, Gita chanting competitions in Tamil Nadu and Chinmaya Vision Programme (CVP) of CCMT’s Chinmaya Education Cell (CEC). He also served at Mumbai for a year in assisting Swamini Amitananda to proof-read and edit various books and establish the recent guidelines of the Chinmaya Prakashan, the Publication wing of CCMT.

In October 2013, he joined the CIF Publications team under the leadership of Swami Advayananda and assisted in editing various books including ‘Brahmasutra Chatussutri’, ‘Advaitaamrtam’, ‘Naishkarmyasiddhi’ and ‘Sri Ramanuja’. He has actively participated in preparation of the annual CIF Newsletters, the Upanishad Course material, and the book titled ‘LEEP’ (Life Empowerment and Enrichment Program – based on the Bhagavad Gita for college students) published by Central Chinmaya Mission Trust (CCMT).

Brni. Devaki Chaitanya was posted at CIF after she completed her Vedanta Course at the Sandeepany Sadhanalaya, Mumbai in September 2013. She has been vested with the responsibility of spearheading grass-root activities of the Mission (Balavihar, CHYK classes, Devi group, Study group, Yajnas on Bhagavatam and the Bhagavad Gita) in the villages and hamlets neighbouring Veliyanad.

She is well versed in music and her recitations of the ‘Narayaneeyam’ and ‘Bhagavatam’ have been converted into audio pen drives by CIF. She is currently the facilitator of CIF’s ongoing Narayaneeyam and Srimad Bhagavatam webinars.

He has been a Chinmaya child having done his schooling in Chinmaya Vidyalaya, Alleppey and thereafter been an active Chinmaya Yuva Kendra member to move onto serving the Mission as a Yuvaveer of the 3rd cadre for two years at CIF. After his service tenure as a Yuvaveer, he further served as a sevak at CIF prior to taking up the Vedanta Course at Sandeepany Sadhanalaya. He played an active role in coordinating the grand inauguration of the Chinmaya Birth Centenary Celebrations (CBCC).

He is presently serving at CIF’s Chinmaya Shivaranjani at Kottayam and the local Chinmaya Mission Centre. He is also the National Council Member of All India Chinmaya Yuva Kendra for the Kerala state.

"The best way to serve a Mahatma is to follow His teachings with utmost sincerity”, says Br. Ved Chaitanya, who is serving at Chinmaya International Foundation. He comes from a family which has always been active in the Chinmaya Mission. Being inspired by the Swamins of Chinmaya Mission, such as Swami Purushottamananda, Swami Siddheshananda and others, he has always been a disciplined sevak of Pujya Gurudev.

He completed his graduation in Electronics and Telecommunication Engineering from Pune University and has also worked for a year in Tata Consultancy Services (TCS) before joining the residential Vedanta Course in Sandeepany Sadhanalaya, Powai in the year 2011.

After the completion of two years of rigorous training under the guidance of Pujya Guruji Swami Tejomayananda and the tutelage of Swami Advayananda and Swami Sharadananda Sarasvati (then Br. Samvid Chaitanya), he received the Brahmacharya Diksha on Ganesh Chaturthi day in the year 2013 and was posted at Chinmaya Mission, Navi Mumbai centre and served there till July 2017. Thereafter, he was posted at CIF and was instrumental in compiling the questionnaire for the Home Study Courses’ Upanishad Course which was launched in October 2017. He also facilitated the Webinar sessions on the Vedanta Home Study Courses. He is one of the main advisers for revamping the Home Study Courses into a completely online format. He also assists Swami Advayananda in the Master Gita Master Life Course.

Being a versatile orator, he conducts regular study classes for elders, balvihars for children and workshops for youngsters in English, Hindi and Marathi.

Br. Ved Chaitanya perfectly depicts young dynamism with pure wisdom. As a person, he is very cheerful and kind hearted, who is always loved by all, right from small kids to the elders. He is very good at playing tabla and has also got several opportunities to accompany Pujya Guruji. 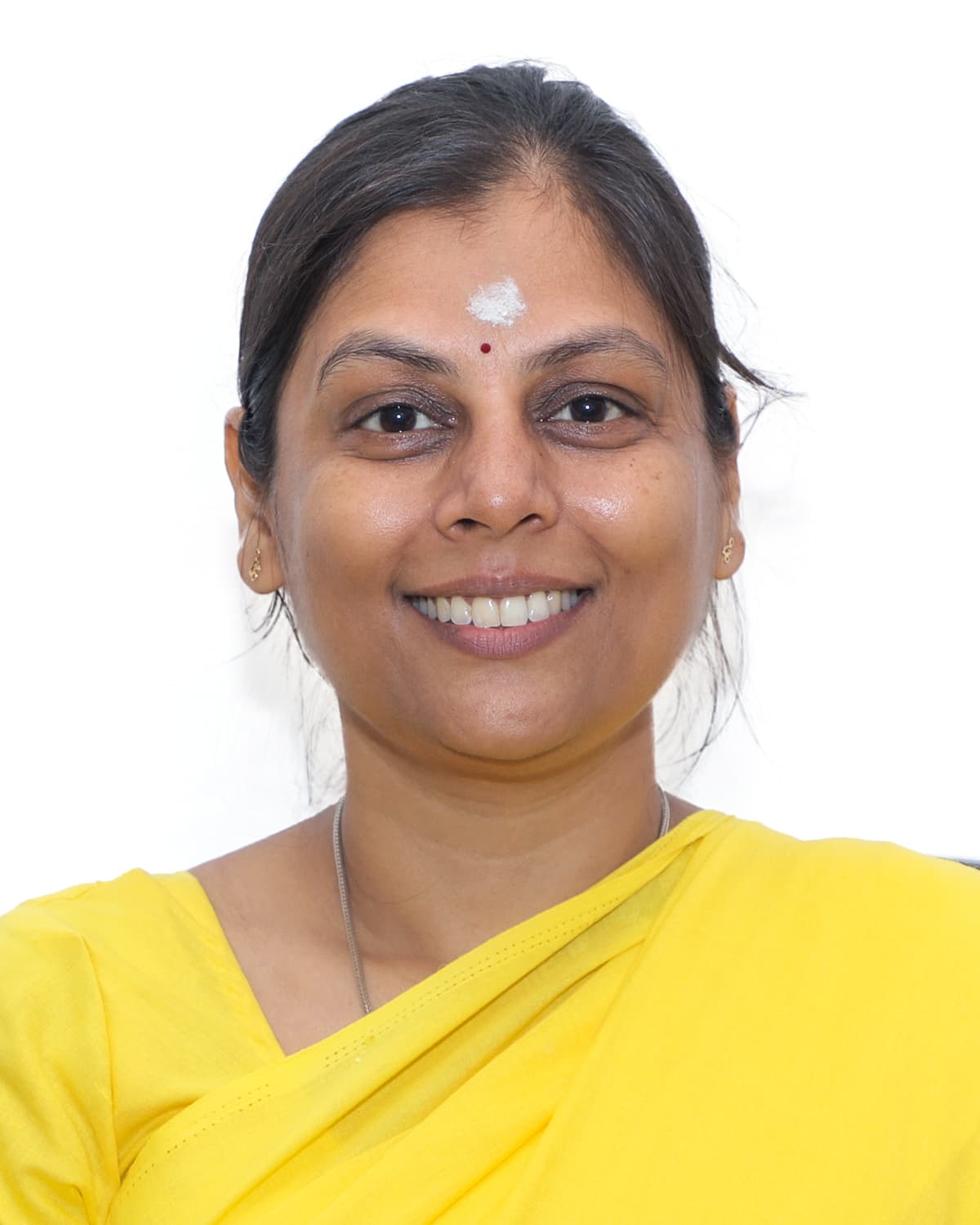 Brni. Taarini Chaitanya's journey with Chinmaya Mission began in 2003 when she joined the Chinmaya Yuva Kendra in Margao, Goa. Inspired by Pujya Gurudev Swami Chinmayanandaji’s teachings and the opportunity to serve India, she joined the third batch of the Youth Empowerment programme and served in different projects and at centres of Chinmaya Mission. Later seeking further clarity, she joined the two years residential Vedanta course at Sandeepany Sadhanalaya, Mumbai from 2014-16.

She has been fortunate to serve at Chinmaya Vibhooti (Pune), Chinmaya Academy of Management (Chennai), and CCMT Publications Department (Mumbai). After completing the course she had been serving at CIF and Chinmaya Vishwavidyapeeth in Ernakulam, Kerala. As part of her svadhyaya and seva she has been a tutor of CIF’s Home Study Courses and has taken webinars on Advaita Vedanta. She attributes her progress to the disciplined training, nurturing care, and continued guidance given by Pujya Gurudev Swami Chinmayananda and other Swamins and Brahmacharins of Chinmaya Mission. 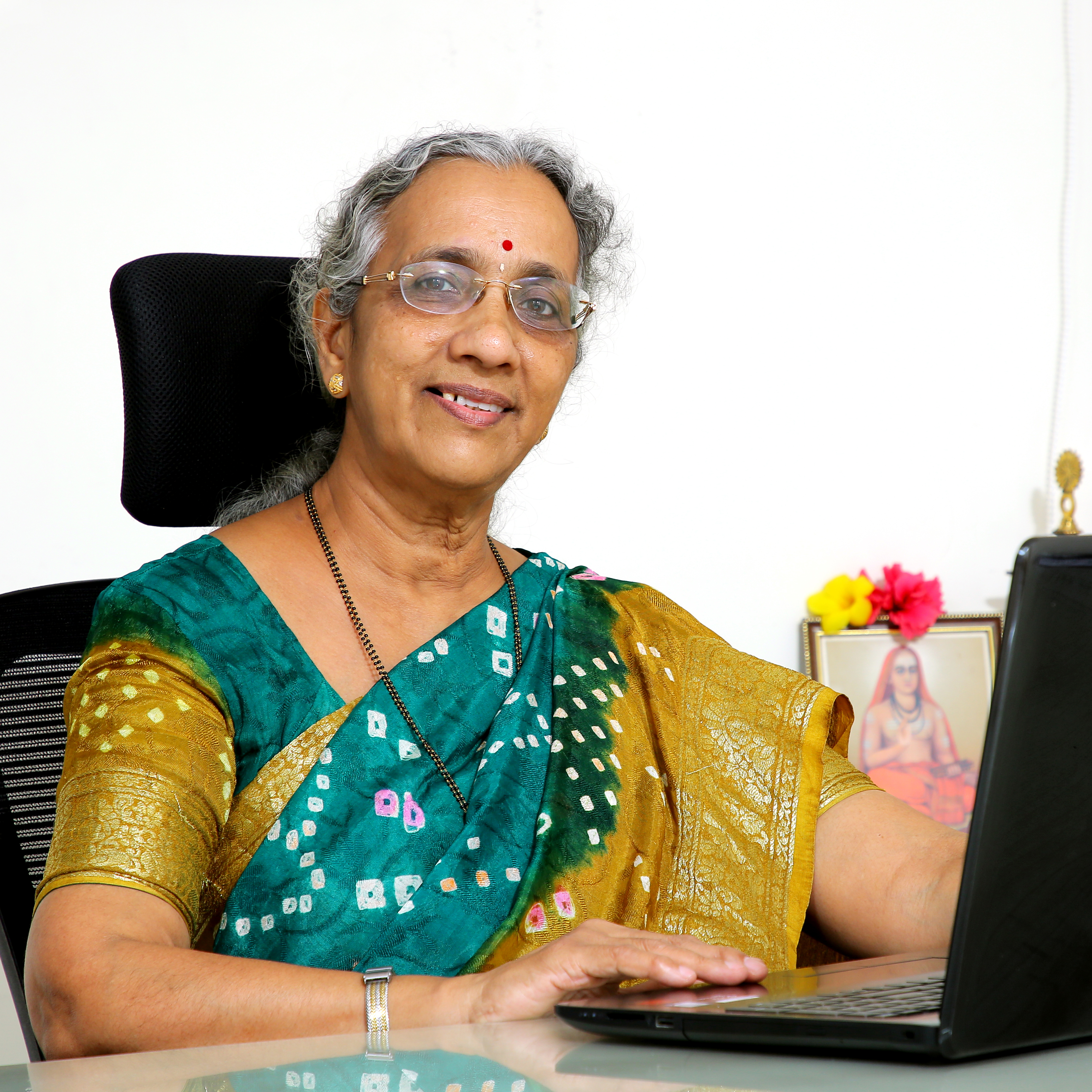 Prof. Gauri Mahulikar is the Academic Director at CIF.
Dr. Mahulikar was the Gurudev Tagore Chair of Comparative Literature Professor, former Head of Department of Sanskrit at the Mumbai University and the former Dean of Faculty at Chinmaya Vishwa Vidyapeeth.

She holds a Doctorate in Sanskrit on ‘Vedic Elements in Puranic Mantras and Rituals’. An author, who has published 8 books and over 100 research articles in English, Marathi, Hindi and Sanskrit, Dr. Mahulikar has mentored several doctoral students; eighteen of whom have successfully earned their doctorates.

She was instrumental in launching courses in Manuscriptology, Bhakti Literature and Mysticism in the Sanskrit Department and has coordinated a UGC funded project on 'Digital Preservation of Palm Leaf Manuscripts' (2010–2015).

Dr. Mahulikar was awarded the Maneckji Limji Gold Medal for her dissertation on ‘Ancient Greek Dramas and Bharata’s Natyasastra’ from Mumbai University. Some of the many awards that Dr. Mahulikar has been awarded are the ‘Ramakrishna Award’ by the Canadian Education Foundation, Ontario, for the propagation of Sanskrit (2003); Guru Gaurav Puraskar by Kalasadan, Mumbai (2011); Kavikulaguru Kalidas Sanskrit Sadhana Puraskar by Maharashtra State Government (2013); Adi Sankaracarya Puraskar awarded by H.H. Sri Jayendra Saraswati Mahaswamigal, the Shankaracharya of Kanchi Kamakoti Peetham (2014); Savitribal Phule Puraskar by Mumbai University (2015); and the Indira Behere Puraskar by Tilak Maharashtra Vidyapeeth, Pune (2015). Dr. Mahulikar was recently awarded the Adi Shankara Fellowship by the Government of Madhya Pradesh to work on the biography and mathamnaya tradition of Adi Shankaracharya. 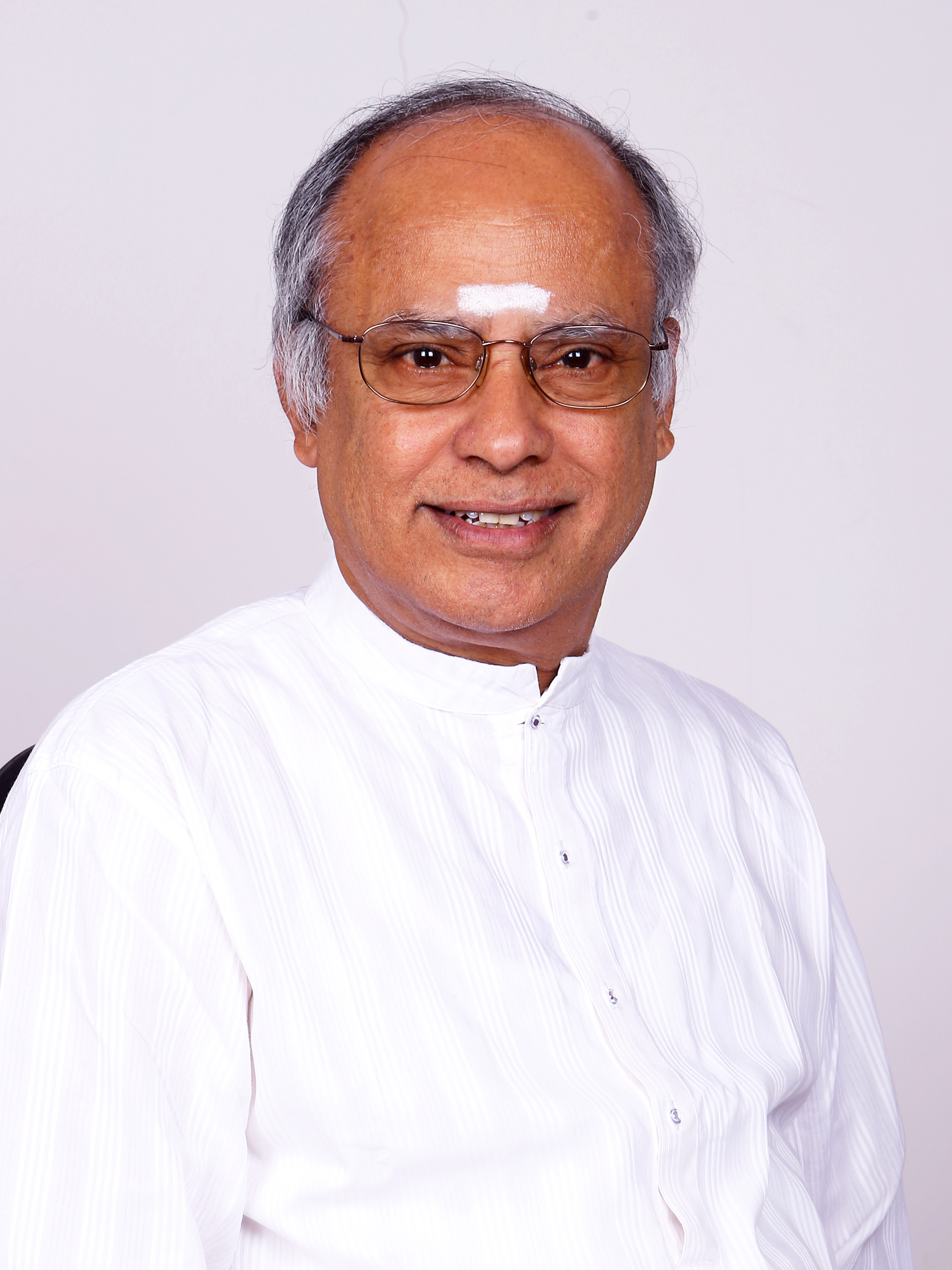 Sri Rammohan completed his Vedanta Course (2011-2013) at Sandeepany Sadhanalaya, Mumbai. From 2009-2011 and 2013-2014 he served at Chinmaya Mission Alpharetta, Georgia, USA where he coordinated and conducted Balvihar Classes, Spiritual Classes, Personality Development classes for youngsters and Jnana-yajnas.

In 2014, he joined CIF as the IT Head, and served in that position until 2017. Presently, he conducts and coordinates various activities at Chinmaya International Foundation such as Vedanta Course and Bhagavad Gita Webinar sessions, evaluation of Home Study courses answer sheets, and other classes on Bhagavad Gita, Vedic Chanting, Pujas and Rituals.

Smt. Shanthi Rammohan completed her Vedanta Course (2011-2013) at Sandeepany Sadhanalaya, Mumbai. From 2009-2011 and 2013-2014 she served at Chinmaya Mission Alpharetta, Georgia USA where she coordinated and conducted Balvihar classes, spiritual classes and Jnana Yajnas.

Quote of The Day

Get to know what happens at CIF. Be in touch
and get regular updates and invitations.